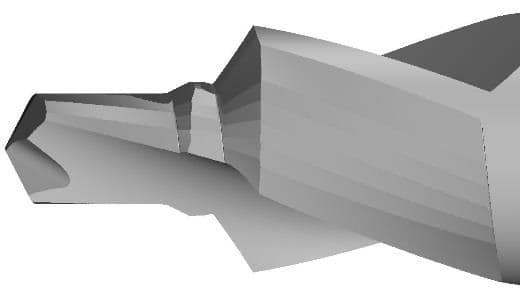 Production over many hours without operator interventions

30 years of constant development of innovations in the field of tool grinding do not remain without traces. Or is it just that? When Mr. Bertoglio first developed the principle of thermal compensation in a tool grinding machine in the mid-1980s, the foundation was laid for incredible precision and efficiency in grinding a wide variety of tool geometries. Optimized technology, modern materials and ever new developments of the basic principle are today the absolute unique selling proposition of consistency and accuracy of TTB tool grinding machines.
A skeptical Customer of TTB Engineering SA was recently able to experience on his own tool just how unbelievably well the operating mechanism of a TTB tool grinding machine works. Within the company, a wide variety of tool grinding machines were tested for their consistency and accuracy. The goal was to produce tools automatically in as large a quantity as possible without the need for a machine operator to intervene and readjust. In the process, the geometry to the first-ground tool was allowed to have a maximum deviation of no more than 3μm. After that, the machine operator had to intervene again and make appropriate compensations. After trials on a wide variety of machine types from several machine manufacturers, the maximum number of pieces within the issued tolerance range was 3 tools without intervention. As they were not satisfied with the result, they decided to approach TTB Engineering SA and asked for a comparable test. Thus, a machine was taken out of the current production and equipped with the desired test series in the test center.

Own test setup in the test center

For the test, the standard model of a TTB EVOLUTION was chosen. The TTB EVOLUTION has a grinding wheel turret with 4 spindles, each of which can be equipped with up to 3 grinding wheels. This means that all the grinding wheels required for the grinding process are ready for use at any time and can be changed automatically within a few seconds. The positioning accuracy from one spindle to the next is a maximum of 0.3 µm axially and radially. In the test setup, the machine was equipped with a loader, with two precise CNC axes with pneumatic swiveling and clamping units, as well as 2 pallets for blanks and finish-ground tools, which can hold up to 800 workpieces in the range from 1 to 16mm, depending on the diameter. 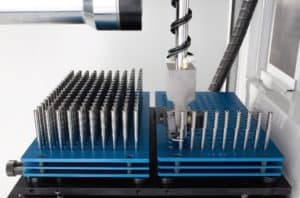 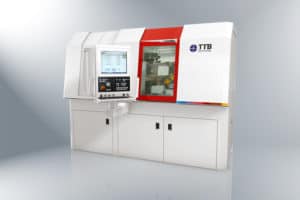 All expectations exceeded by far

After the test setup was accepted and the machine was set up, the test run could start. Since they were sure that they could easily produce the required 3 workpieces within the tolerance of 3μm, they were quite confident in the test center of TTB Engineering SA. Nevertheless, they were naturally very curious to see by how many precisely ground tools the previous tests could be surpassed? The tool grinding started and soon the third tool was ground and measured. Lo and behold, the tolerance was still well within the required 3μm. So, the test continued and all the tools were constantly measured accurately. After 5 tools still in tolerance, after 10 tools still no cause for concern, 30 tools, 50 tools, and so on. In the end, there were 107 fully automatically produced tools with a geometry deviation below 3μm, without a machine operator having to intervene or readjust in any way.

Measured values from the test setup between 3 and 100 tools

The customer looked at the result almost in disbelief before his amazement turned into absolute enthusiasm. Another customer who is completely thrilled by the absolute consistency and maximum precision of the TTB Evolution and has since been using the machine very profitably in day and night shifts without errors. 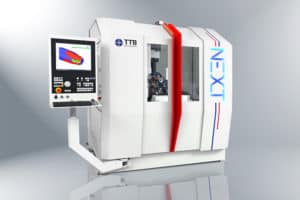 Next generation consistency and precision – TTB NEXT

The next generation of precision is already ready

The latest new entry to the TTB family is the TTB Next. A machine that takes the notorious consistency and precision of TTB Engineering SA to the next level with further innovations and even requires a 30% smaller footprint compared to the TTB EVOLUTION.